The Lemonade Award of Fatal Fucking Awesomeness!
Here's the deal: I have to list three things for which I'm grateful, and pass the award on to bloggers who inspire me.

I was tagged by Renegade Evolution, so here we go...

1) Lemonade. it's almost better than beer.
2) Microsoft Flight Simulator X. for reasons not even I understand yet.
3) the Mei Tai, Asia's gift to the world of motherhood.

gimme a head with hair...

inspired, loosely, by ruminations on the Farrah-do, and the meaning of hair on women's heads, and the thread over at Nine Deuce's -

lots of noise about semen on the face, the assumed inherent misogyny thereof, so forth. and hilarity ensues, as usual. (my participation in the thread is towards the end.)

But I got to thinking about other stuff that is considered to be humiiiating by some people in some contexts, but not by others in other contexts. and I thought about women who cut their hair or shave their heads.

I thought about girls in the 1920s who "bobbed" their hair, and felt all liberated.

then I thought about an old picture I saw once showing a French woman whose head had been shaved because she was considered a Nazi collaborator.

then I thought about Sinead O'Connor and her rocking baldness.

then I thought about shaving my own head, or having a friend help me shave my head, because summer is hot and my hair is totally out-of-compliance anyway and it's not doing me any favors.

well, see, let me clumsily try to explain myself.

we got women who are on-purpose cutting their hair short, or off, in order to say "fuck you" to someone - fathers, boyfriends, The Patriarchy, whatever. We got women whose hair has been forcibly cut off as punishment. And we got women who just don't want hair anymore. the net visual effect is pretty much the same - women who are bald, or as close to bald as makes no real social difference. But Sinead O'Connor is not the same, in relation to her bald head, as the alleged Nazi collaborator, is not the same as a short-haired flapper, is not the same as me. (and, you know, there are a bajillion other reasons and situations for women to be bald, obviously, now that I think about it.)

Insofar as a bald head is a symbol of something, the meaning of that symbol changes with time, and situation, and with the people involved.

yeah yeah yeah semen on the face I'm getting there.

I think it's the same for semen on the face. haHA! see, I got there.

but when such activity is, so to speak, woman-led, I can see where semen on the face, despite its similarity to evidence of nonconsensual sex, is uncoupled from shame and humiliation and degradation. and I think the shame and humiliation and degradation can be replaced with, well, just about anything - pride, amusement, satisfaction, indifference, whatever.

I mean, if resisting or reframing or rejecting social messages is impossible, then Sinead O'Connor could not have shaved her head as a protest against the tyranny of beauty, and made her rockin' baldness a thing of pride and striking beauty itself; and flappers of the '20s could not have hacked off their "crowning glory" with reckless aplomb; and I myself could not rid myself of the horrendously unattractive and unmanageable wild animal that lives on my head, without all being considered "the same as" a punished, humiliated, degraded traitor.

which is obviously bullshit.

so there's an epidemic of famous people keeling over dead. and whenever that happens people fall all over themselves to be the first to say something nice about the deceased. it seems to be a ritual that people need to do, maybe by way of making sure that people don't trash-talk you at your own funeral, on that fateful day? I don't know. insofar as I totally don't expect anyone to even notice I'm dead, I don't feel obliged to eulogize, so much.

but it's way cool to talk about Dead Farrah, and I'm nothing if not cool, um, right?

Your domestic violence work was just the beginning of all you gave and accomplished in your life. You were a voice for the voiceless, an inspiration to suffering women everywhere, in their homes, struggling in the criminal justice system or in prison. Thank you for the stand you took on behalf of battered, raped women. Thank you for believing us. Thank you for your amazing performance in which you shed your glamorous image in favor of identifying with those of us who have been beaten, battered, and raped by men who said they loved us. Thank you for all you have given to and for women.

which is all very nice. and apparently Dead Farrah did lots of charity work for domestic violence survivors, was on the Board of Directors for a big old non-profit helpful helping agency, and that's great. And The Burning Bed was indeed a compelling piece of TV melodrama, no question. I mean, holy cow, who didn't get all emotional and worked-up by the end, right? There's no better example of the genre, and it was way ahead of its time.

oh, and it was the very first television program to have that helpful "if you have a problem with blah blah meow, call one-eight-hundred-meow-meow-blah, and get help" thing. so also great.

but as I'm always wont to do, because I am the most hypersensitive self-centered narcissist EVER, I'm moved to wonder - hey Dead Farrah, what have you done for me lately?

Heart lists everything Dead Farrah gave to women - you know what you gave me, Dead Farrah?

you gave me a complex, lady. that's what you gave me!

I knew that Farrah Fawcett was important, and it seemed to have something to do with boobies and hair and smiling and boys liking you. it made me uneasy.

that poster? with the red bathing suit? it was everywhere that year. I took one look at it, in all its glossy perfection, and knew I would never ever be that, get there, attain that. I was short, frizzy and speckled, she was tall, blonde and perfect. it was my first experience with unrealistic beauty standards, and I remember being really angry about it. I and my little friends mocked her viciously:

get it? "drippy faucet" 'cuz, Fawcett? Majors-minors? hardeharhar. yeah, we were the height of sophisticated witty mature comedy stylings. because we were eight.

but consider the whole poster thing: here is a picture of a woman advertising her sexual appeal, bent and folded and twisted into a strange contortion of availability - her legs say no no no, but her eyes say yes yes yes! she's the very definition of "sex symbol" - a woman who profited handsomely by showing off her body for the approval of patriarchy, yeah?

but I'm just thinking on this - is it still okay, now that we've named this new saint of feminism, to critique the high-heel-wearer, the hair-do-er, the lipstick-user, the man-pleaser-in-any-dimension, on the assumption that their behavior is not sufficiently feminist and encouraging of misogyny?

I mean, can you GET any more, er, "sparklepony" than Farrah Freaking Fawcett?

and yet somehow she managed to rise above her blatant toadying to The Man to become America's Next Top Feminist, Posthumous.

(good thing I'm not expecting anyone to say anything nice about me once I'm dead!) 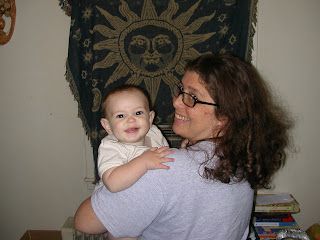 at this time last year, I was in labor with you. that was quite a ride.

at about four in the morning, my water broke. I said to your father "honey, I feel kind of strange. do you think it's time?"

and your father threw up all over his shoes. that's how I knew it was time. so off we went. fourteen hours of screaming for my mama later, there you were.

you were really small. and really hungry.

and now you're bigger. and still pretty hungry.

so, now, you're some 15 pounds heavier (oy!) and, I don't know, like four or five inches longer, and you have three and a half teeth.

and that's about it. you don't walk yet, or do any fun tricks, but you do know three words: mama, dada, nurnurnur (nurse). and that gets you by.

you've turned me into a total duct-tape mom, though. I like carrying you around with me everywhere. You ride around on my back all the time. we ride the bus together, go to work together, walk to the market together in all kinds of weather - we even walked up and down the las vegas strip together in December. (You were not remarkably impressed. Mostly, you slept.)

before I get all sappy and disgusting, let me just say (of course) - your mom and dad love you VERY MUCH.

oh, and one other thing:
there's this little boy, his name is Phin, he's about two, his mom works at the same place I work and he comes to work with his mom all the time. about three months ago, Wolfie was crying for some reason (I think he smacked his head, or was lonely, or swallowed a bee or something...kidding, kidding...), and Phin had this great deep moment of empathy - you could totally see the compassion radiating from his adorable little head, it was crazy - and he patted Wolfie really gently on the head, and said

so, now, all your little friends call you Wookie.

(and may I also include a big huge mooshy wet kiss to Rootie, who helped me get through the first few months without jumping off a bridge. I will always love you for that.)


so this is totally cool: 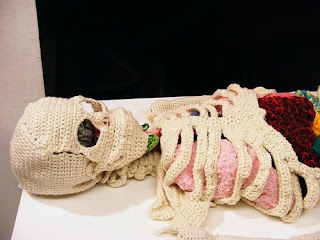 I want to knit a skeleton!

(you know, I used to take the time to explain myself, to link to my source material, to really fully explore all my ideas. no more. no time. wish I did. these days I'm lucky if I get five minutes to blog at all.)

it may not be a virtuous thing, or a pure thought, or a particularly bold or righteous action, but why should feminism have a skewed view of womankind?


*I know - a grammar monstrosity. but there it is. maybe later I'll come back and pretty it up some so I don't appear so stone stupid. (but you know what they say about trying to polish a turd...)

I don't have a whole lot of time to go into it point-by-point, but I will say this, borrowing from the right-wing gun nuts of my childhood:

really, I don't know how much more simply I can put it.